Research conducted under the auspices of the National Cooperative Highway Research Program (NCHRP) Project 20-7, Task 347 “Test Methods for Watertightness of Culvert Joints” investigated the effects of longitudinal bending on culvert joints of three material types: corrugated steel (CSP), high density polyethylene (HDPE) and reinforced concrete pipes (RCP). Within these materials, there were two types of joints examined – those that release the longitudinal bending moments (bell-and-spigot joints typically used by HDPE and RCP manufacturers) and those that transfer the bending moment (banded connections used by CSP fabricators) across the joint. This research project utilized laboratory experiments to evaluate the behavior of the various pipe systems under simulations of two different cover depths and to document response to the surface loads in a variety of positions. 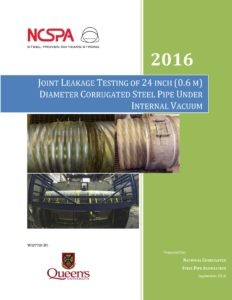 In general, this research was conducted to develop a test standard to assess both the structural adequacy of the joint types subject to the resultant shears, moments, and rotations; as well as the ability of these various joint types to maintain sufficient gasket compression at defined pressure levels. A joint’s performance is derived from the level of differential pressure maintained while subjected to those movements.

This past December, a group of engineers and researchers set about further examining the leakage of banded connections for corrugated steel pipe (CSP). At Queen’s University in Kingston, Ontario specimens of 24″ (0.6m) diameter 16 gauge corrugated steel pipes were assembled and subjected to a series of loading scenarios under an internal vacuum (i.e. external air pressure). These two pipe sections were fitted with steel bulkheads, which are widely used in detention and recharge systems, and welded seams per American Association of State Highway and Transportation Officials (AASHTO) Standard Specification M36. The connections employed 3/8” thick gaskets meeting the American Society for Testing Materials (ASTM) Standard Specification D1056, along with band types including both a semi-corrugated or hugger band and a fully corrugated band. This allowed for a total of seven tests to be conducted. Click here to read the Real Deal Alert.

The full report of this testing can be viewed by clicking here.

Steel lasting a century – that’s the real deal that engineers, specifiers and contractors can depend on. With 100-year service life on the greenest and most cost-effective product in the marketplace, the new steel is the proven choice for today’s environments.