Pacific Corrugated Pipe Company was contacted by a specially developed joint-venture company made up of three large general highway contractors. This JV was created to support the largest highway construction project and highway public-private-partnership in Arizona state history. The project is made up of 22 miles of new highway and created a bypass of downtown Phoenix from interstate 10 while also connecting the East and West regions of the metro area. This new design-build highway will be called Highway 202 and will cost approximately $1.66 billion by the time it is completed in early 2020. 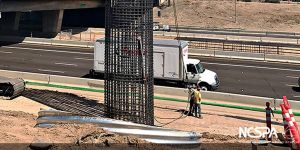 This expansive project included the state’s first half diverging diamond interchanges and the state’s first highway double roundabout. Since the project required passage through existing streets and neighborhoods, the project included 41 bridge overpasses, 12 miles of sound walls and even a pedestrian bridge. There was a need for blasting in some areas so a group of 150 photographers where hired to take before-and-after pictures of residences to confirm any damage due to this blasting. While this was a multi-year project, a significant amount of work was completed in 2019 with some ongoing work in 2020.

Pacific Corrugated Pipe Company’s involvement in this project has been wide-ranging. We have supplied approximately 8,000 feet of 18” slotted-drain pipe. Additionally, we have supplied galvanized corrugated pipe ranging in diameters from 24” to 90”. All totaled we have produced over 10,000 lineal feet of corrugated steel pipe in support of this project. Some of the CSP supplied on this project has been arched as well. The arched pipe diameters ranged from 24” to 90” as well. Some of this pipe was used for non-vehicular pass- 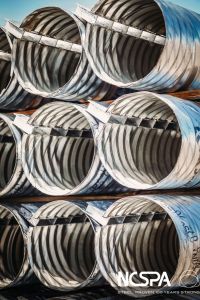 throughs for people and such animals as deer, javelina, desert tortoises and chuckwallas. Also, our CSP was used in both non-vertical and vertical installations, with large caissons needed for bridge pillars.

Some other unique uses, outside of caissons, included pipe being used as temporary storage basins to retain large volumes of water and to direct these volumes to the Salt River. Multiple culverts were required under city arterials and other locations to provide a crossing for power and irrigation utilities. Additionally, six jack and bore installations of various pipe sizes were used under a railroad.

Finally, because of the comprehensive nature of this project, we supplied several other accessory items including couplers, frames & grates, tapers and end sections. Ultimately, this comprehensive project successfully showcases corrugated steel pipe and its multitude of uses on the largest project of its kind in Arizona.