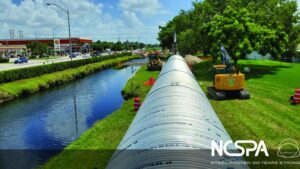 Miami-Dade County Department of Transportation and Public Works (MDC) was notified of a partial culvert collapse and needed to act quickly to avoid any further damage to the culvert as well as the roadway above. The original culvert that failed was installed many years ago, while there was an extension that was added when the road was widened a few years ago which remained intact.  As soon as the County discovered the failure, they closed half of the roadway, detoured traffic, and began looking at viable solutions. Fortunately, only the original portion of the culvert would need to be cut in and replaced while the rest could be relined with a new liner pipe. The County worked with local contractors, David Mancini & Sons, Inc. (DMSI), to devise a way to address the emergency situation that would be both structurally efficient and cost-effective. The goal was to identify a solution quickly that would allow them to replace the partial portion while relining the remaining section as they could not afford to shut down the roadway above. Speed was of the essence. 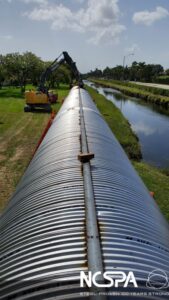 Ultimately, Miami-Dade County and DMSI utilized an ALT2 CSP solution manufactured by Contech Engineered Solutions to reline the existing culvert. The 137.5 LF of 120-inch pipe was manufactured with skid rails at the nearby Lantana, Florida manufacturing facility and shipped directly to the site. DMSI came up with a very interesting method to pull this off with as little disruption as possible which was to install the liner pipe in a completely submerged condition. DMSI completed the emergency culvert reline for Miami Dade County Transportation and Public Works Department by assembling the pipe on a nearby staging site. At which point, they installed the liner pipe under live flow using a unique antibuoyancy method to lower the pipe into the water and align with the host pipe prior to relining and grouting in place. 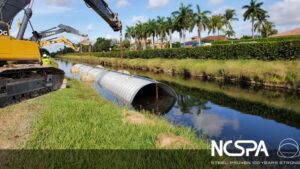 David Mancini, Jr. of DMSI commented, “A special thanks to the Contech team for taking my calls at odd hours of the night to discuss and design our in-the-wet reline concept. It was a lot of fun working with Contech to turn these conceptual ideas into reality! The materials and pieces of the puzzle were prefabricated and shipped to the site exactly as we envisioned.” The County was extremely pleased with the quick installation to repair the existing culvert with a fully structural pipe that would adhere to the service life desired while avoiding major roadway closures at the same time. For additional detail, please check out this installation video created by DMSI.