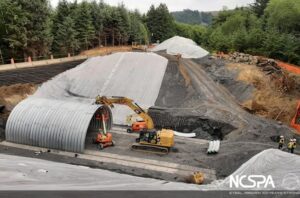 The Johnson Creek project involved removing a fish barrier and  replacing it with a fish-friendly, bottomless arch. These types of projects are generically called AOP’s ( aquatic organism passages ) or simply fish passage projects. Fish passages allow for various species of fish to travel as far up a stream as they historically did to spawn prior to a barrier being placed in the stream. 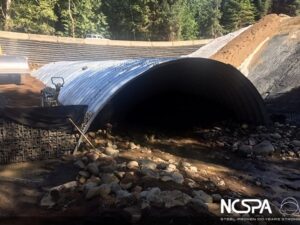 The challenges on this project involved a deep excavation to get down to the streambed elevation, construct a bypass road with very steep side embankments, assemble a plate structure in the excavation, and complete by the end of the fish passage window ( spawning season ), or when the fish would begin their trek upstream.

The project was partially funded by the North Olympic Salmon Coalition, a non-profit salmon enhancement group. The plate was ordered the last week of May 2020 and arrived on site the first week of August 2020. Prior to the plate arriving, Interwest Construction had completed the deep excavation, established a stream bypass and constructed the temporary bypass road. Hoko-Ozette Road is in a remote area and establishing a detour route was impossible, so the temporary bypass road was required. They had also completed the installation of the reinforced concrete footings for the arch foundation. 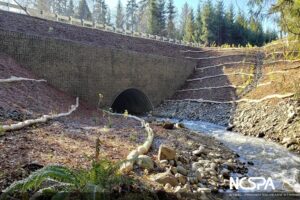 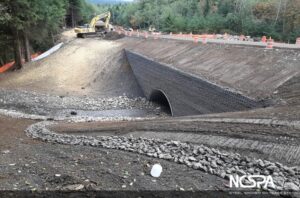 Assembly was completed in less than 8 days for the 83′ long structure. Staging the required equipment in a such a deep excavation was difficult but went as planned. The structure was then backfilled with the prescribed backfill materials and compacted to the required compaction level. Mechanically stabilized earth (MSE) headwalls were constructed at each end as the backfilling proceeded. Above the wirewall headwalls, Interwest Construction then built steep embankment slopes with planted local vegetation to complement the surrounding area. 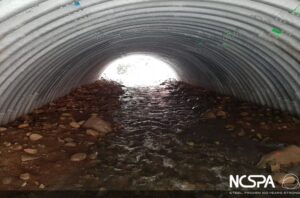 The project was completed within the allotted time frame and the salmon have succesfully already moved upstream in the first spawning season after the construction.