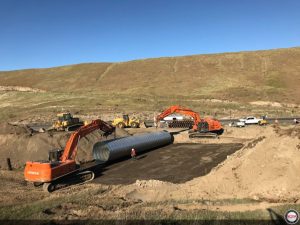 When the third largest landfill in the United States was having its garbage transportation rail system interrupted due to excessive storm water over the tracks, they were pressed into an emergency to correct the problem. Columbia Ridge Landfill processes 2.74 million tons of waste per year. It’s a modern landfill that creates renewable energy from both municipal solid waste and industrial and special waste which is received in by rail cars from Portland, OR and Seattle, WA. Two trains, with up to 90 cars each, enter and exit the landfill each day on a very strict schedule. While the track was cautiously passable, another severe storm could wash out the tracks. To compound matters, this flooding was occurring in multiple areas of their tracks located about 1/2 mile away from each other. It became critical that a solution be developed in short order and the solution be installed quickly. 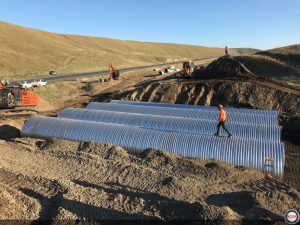 Developing the right solution was further challenged by the fact that it would be installed under the railroad tracks. The pipe would not only need to be larger in diameter than the current 48” system but also strong enough to withstand the weight of trains pulling dozens of waste-filled cars. After reviewing all the data, the best solution was to develop and deliver 420 feet of 108″ 8 gage 5 x 1 galvanized CSP manufactured in 60′ lengths. Additionally, there was a need for 60 feet of 96” and 84” 8 gage 5 x 1 pipe to complete the two systems. This pipe would be placed in five pipe runs for one section and four pipe runs for the second section with each pipe running parallel to each other. 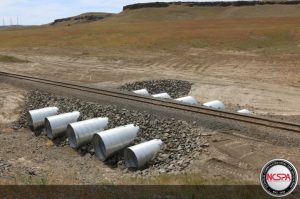 So, with a plan in place, the landfill enlisted Pacific Corrugated Pipe Company (PCPC) to quickly fabricate the new storm water solution. The logistics and coordination of installing the solution became the next challenge. PCPC was able to quickly produce the material and worked closely with the freight and landfill company to deliver and install the new solution. After extracting the existing 48″ pipes, which were clearly under designed, the new solutions were installed in a period of about 8 hours so as not to interrupt any deliveries to the landfill. The elimination of couplers and the use of 60′ lengths proved to be the right choice. The contractor was able to install and backfill all replacement pipe and reassemble the tracks before the next scheduled train, so the daily deliveries were not interrupted. The strength, efficiency and rapid production of CMP comes to the rescue again.