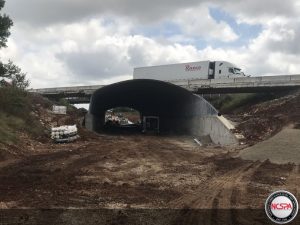 The I-44 EB & WB Over CR1147 & Route 96 projects consisted of the replacement of four interstate bridges with buried bridges at two locations on the project.  The overall project, known as the I-44 Bridge Rebuild Project, consisted of the replacement of 19 interstate bridges over a 29 mile section of I-44 between Joplin and Springfield, Missouri.  The project was developed through a design-build process, with the design-build team consisting of Emery Sapp & Sons, Inc. as the contractor and a partnership of Lochmueller Group & Parsons Engineering as the engineer.  Collaboration through the design-build process was critical to the success of the project.  The I-44 Rebuild included the replacement of twin eastbound and westbound bridges carrying I-44 traffic over CR1147 (a two-lane county road) and Route 96 (a single lane entrance ramp from Route 96 to westbound I-44).

The design process for the two bridges involved the development of custom geometries by Contech based on inside clearance requirements for the roads passing through the structures, along with the need to limit the sizes of the structures to avoid conflicts with the existing bridges and foundations.  There were several iterations as Contech developed multiple geometry options, receiving feedback from the engineers and contractor along the way, resulting in final shapes that provided the best solutions based on design efficiency and ability to meet all of the project requirements. 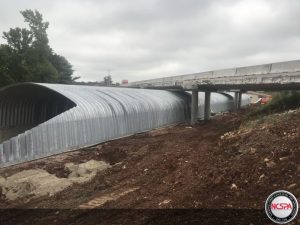 As part of the solution evaluation process, the design-build team also considered conventional precast concrete girder and various precast arch and box options.  Priorities with the bridge replacements were to eliminate/minimize detours, minimizing construction time, installed cost & life cycle cost savings, and the ability to achieve a 75 year service life.  In the end the team opted to go with deep corrugated steel buried bridges.  Main factors in the structure selection were: 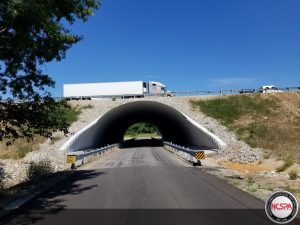 The deep corrugated steel structures were able to accommodate different step beveled configurations at the ends to accommodate the desired embankment slopes and eliminate the need for headwalls.  The Route 96 structure was at a skewed alignment to I-44.  Rather than skewing the structure and having to build a concrete collar or headwalls to support the ends, the team opted to use an unbalanced step bevel.  This allowed for graded slopes at the ends and eliminated the need for a special design or reinforcing for end treatments.  The CR1147 was essentially square with I-44 and was able to use a more conventional step beveled configuration to accommodate the desired graded slopes. 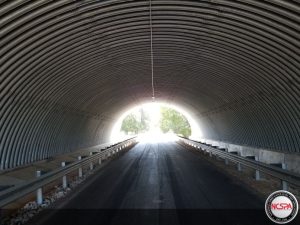 The projects included installed cost and time benefits in addition to the structure benefits: 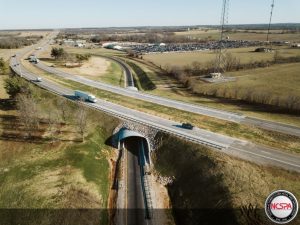 This project drives home the value and many of the advantages that structural plate buried bridges can bring to a bridge replacement project.  Additionally, the design-build project delivery method and resulting input from the contractor and engineers during design allowed the team to effectively find the best solution for the project.