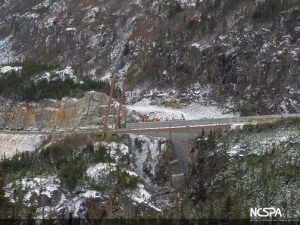 suspension bridge was constructed in 1976 and connects Skagway to the Yukon highway network. Throughout its history the bridge has carried a lot of traffic, including many heavy trucks loaded with ore. The heavier ore trucks have been causing significant deflection, reportedly causing distress in some of the foundation ties. The Alaska Department of Transportation and Public Facilities (ADOT&PF) engaged DOWL Engineers of Juneau, AK to evaluate potential replacement structures. After evaluating several potential options, DOWL and ADOT&PF elected to use a large span deep corrugated structural plate Buried Bridge to provide a hydraulic opening for the fast moving Captain William Moore Creek while filling in the rest of the gorge with roller compacted concrete. The 75 ft span x 15 ft rise Buried Bridge bears on foundations over 100 ft below the Klondike Highway and was design to act as a stay in place form for placement of the concrete in the gorge.

The structure had to be built on a 16 degree skew to the highway because of the rough terrain and site limitations. 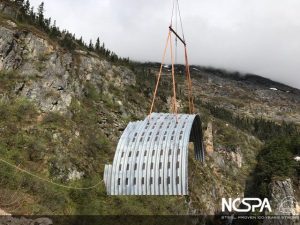 Hamilton Construction, LLC also requested that the structure be fabricated so that it could be built in place completely from the outside because of insufficient space to operate equipment on the inside of the structure during construction. Contech/Big R Bridge worked with Hamilton to design an external bracing system to allow for the support of the skewed ends of the structure without a concrete collar. 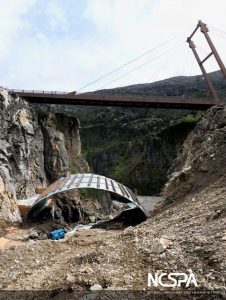 The structure was also manufactured with special splicing hardware to allow it to be pre-assembled in a staging area in three large sections, lowered into its place on the footing, and each of the large sections connected completely from the outside. This helped to speed up assembly in an area where the construction weather window is short as well as improve the quality and safety of the installation since much of the assembly could be completed in a more controlled setting. After the sections were connected, the external bracing to support the skewed ends was attached. The backfill material consisted of concrete placed in lifts up to a height of about 5 ft above the crown of the structure. Roller compacted concrete (RCC) was placed above that level up to the road subgrade 75+ ft above. One key component to the success of the project was that DOWL and ADOT&PF involved manufacturers in evaluating the feasibility of the project early on and allowed for flexibility in means and methods for construction as the installation details were being developed. The original bridge remains in place for recreation uses. 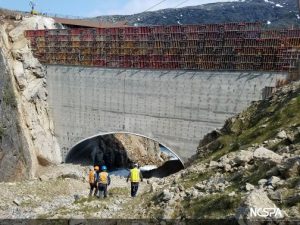