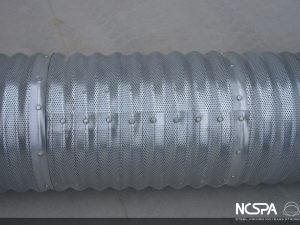 In the grain belt of the United States farmers have been blessed with technological and genetic advances that have allowed them to produce corn and soybean yields that would be almost unbelievable to farmers 20 years ago.  This over abundance, as good as it may sound to the general public, has created numerous issues for those producing the crops and those responsible for merchandising the crops(co-ops, processing plants, farmers, etc.)  The largest and most pressing of these issues is storage of the harvest.  Whether it be a more permanent flat storage facility, or a temporary outdoor “overflow” storage facility, proper storage of  grain helps keep the product marketable for longer periods of time and allows producers to hold on to crops until pricing is more favorable or processing facilities are able to take physical delivery of the grain.  When a producer’s or merchandiser’s storage facilities are improperly designed (i.e. the lack of proper airflow into grain piles), they risk the loss of millions of dollars in spoiled/rotten grain.  This grain storage and grain preservation market is where companies such as Rolfes at Boone have come to serve.  Rolfes at Boone designs, manufactures, and installs grain aeration, dust control, and hazard monitoring systems throughout the United States.  One area Rolfes at Boone specializes in is the design and manufacturing of corrugated metal aeration systems for flat storage and temporary storage systems.  In these types of storage systems, the two most commonly used products providing aeration to the grain are corrugated metal aeration pipe and HDPE aeration pipe.  While numerous companies have switched in recent years to HDPE aeration systems, Ryan Moorman project manager with Rolfes at Boone, still firmly believes in utilizing corrugated metal aeration pipe in there systems.  Although Rolfes at Boone completes numerous projects every year, one particular project in 2018 stood out in Ryan’s mind and is summarized by Ryan below. 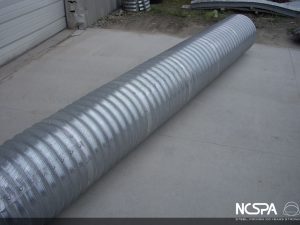 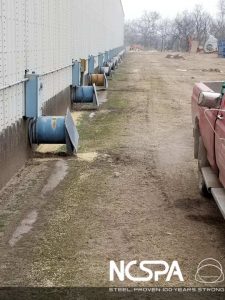 “ In July of 2018 we were contacted by a grain handling facility in Mexico, MO to help design an aeration system for a 72’ x 140’ x 24’ flat grain storage building. The previous aeration system was having issues and needed replaced.  We were able to use 18” dia. x 16ga Galvanized, Corrugated Steel Pipe on the interior of the building to supply air through the grain. The customer had previously been using plastic pipe, but that had broken down over time and they were ready for a more permanent fix. “

According to Ryan’s calculations on this particular project, the cost of utilizing steel pipe vs plastic pipe was about 30% higher.   However, when considering the supreme durability and increased performance associated with corrugated metal aeration pipe, Ryan was able to help the customer understand that while the upfront price of metal may be higher, the overall cost will be lower.  The lower cost can be attributed to replacing fewer damaged pipes that get crushed during loading/unloading of grain with heavy equipment and an increase in performance and efficiency of the system.  Performance and efficiency increases are due to corrugated metal aeration pipe having 6 times the amount of perforated surface area vs plastic which translates into a larger and more uniform airflow achieved with lower air velocities (i.e. less energy required to move the air into the grain piles). 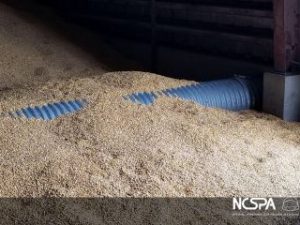 Corrugated metal pipe aeration systems are easily fabricated to meet the spatial and aeration requirements for almost any flat storage or temporary grain storage system.  Most commonly, 18 gauge and 16 gauge galvanized coil is perforated, corrugated in sheets to the desired lengths, and is then constructed in an annular riveted fashion.  Pipe constructed in a riveted manor also allows for additional customization by offering the ability to alternate solid and perforated sections.  By utilizing both solid and perforated galvanized sheet, airflow can be directed in greater volume to areas that may require greater airflow (such as the center of the pile), while reducing airflow in areas requiring lower volumes (such as the shallower edges of the pile) 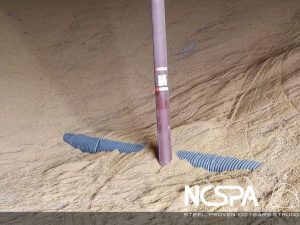