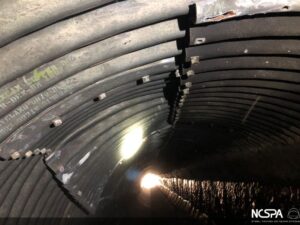 In the spring of 2018, AECOM consultants started discussing some culvert candidates for rehabilitation with DLVEWs, a culvert rehabilitation specialist, and Contech Engineered Solutions.  The most critical project on AECOM’s radar was a project for Massachusetts DOT underneath Interstate 90 in Russell involving aging twin 120″ metal culverts, where each was estimated to be 550 feet long.  The culverts had originally been installed in 1957. The culverts both had approximately 80 feet of earth cover. Initially, digging and replacing the culverts was discussed as an option but was never considered feasible for this project due to the major impacts excavation would have on traffic, schedule, and cost.

A site visit was conducted a few weeks after the initial discussion. It took multiple site visits from all parties involved in the project to determine what the failure modes were. Not only did much of the invert and lower haunches have section loss, many of the bolts of the culvert had sheared and plates were detached. Even the ceiling plates had started to separate from themselves. Due to the plate separations and movement, it was determined that the rehabilitation method (pipe liner) should be something that could be constructed piecemeal so that the installer had the flexibility to make small directional changes or even safely remove small parts of the host pipe if needed. 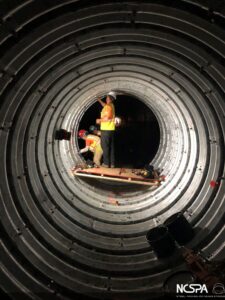 The chosen solution was 2-Flanged Tunnel Liner Plate with a low density cellular concrete for the annulus and void fill. The Tunnel Liner Plate was constructed on-grade and then lowered in singular completed rings and carried into the host pipe. The individual rings were then bolted on to one another. The low density cellular concrete volume was estimated at around 1,200 cubic yards and was performed in stages such as to not float the liner pipe.

The contractor, E.T.&L. Corp., was able to successfully complete the project during COVID in late 2020, in just under 4 months of construction time from start to finish. This rehabilitation project provided significant savings in time, cost and improved safety for the Massachusetts DOT and the traveling public in lieu of a full replacement of the structure.