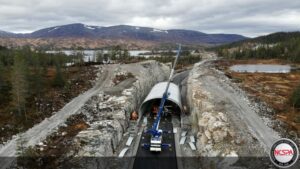 In an effort to safely help the reindeer cross through a busy highway, officials in Norway decided it was time to install a wildlife crossing.

The construction of the animal crossing required an angle or bend in the longitudinal direction of the crossing so that it could fit in the space previously carved out of the mountain for the new line of the E6 main road.   The new crossing was placed on top of concrete foundations and fixed through M22 stainless steel precast anchor bolts.  In an effort to minimize the use of concrete, the new crossing would have a steel collar which would also reduce the total construction time (the road was schedule to open before Christmas 2020).

The new structure was calculated by the Swedish Design Method and designed and executed by partner and designer Sweco Norge AS.  The new animal crossing weighs in at approximately  200T of steel and has various steel thicknesses that handles the dead load of up to 24.3′  height of cover (which would include the snowmobiles and service road loads). This new crossing was assembled in October 2020 and took approximately 3 weeks.  All of the construction was performed by the ViaCon Norway crew with the crane operation provided by Polarkran AS. 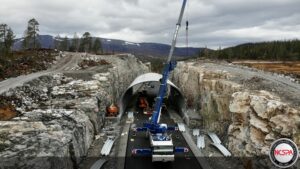 This is Norway’s first 500x237mm (UltraCor) corrugation, which opens up to larger spans and loads. The distance from the center road through the construction, and up to the top level at the surface varies from 32-49′.