Project Spotlight: Structural Plate Bat-Bridge Over The B 31

NCSPA » News » Project Spotlight: Structural Plate Bat-Bridge Over The B 31 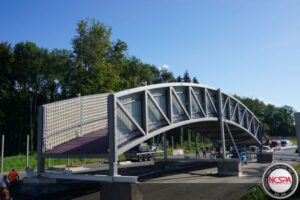 In the further course of the B31, a bat overflight structural plate bridge was built in order to minimize the fragmentation effect of the route for the flying animals. The structural plate bridge was planned as a trough structure with a clear width of around six meters between the walls, which are at least three meters high and designed as trusses. The span of the bridge reached around 35 m.

This special bridge can be found between Immenstaad and Friedrichshafen near the big lake “Bodensee” and is an absolute eye-catcher when you are driving around on the B31 road. 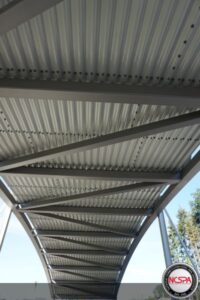 All considered steel sheets have special boreholes for the assembly with the steel frame of the bridge and are galvanized according to DIN EN ISO 1461:2009 and additionally coated according to ZTV-ING, Part 4, section 3, appendix A, Tab. A 4.3.2 / color: RAL 7035 (light gray) for the side-sheets and the underside of the bottom-sheets / RAL 3007 (black-red) for the upside of the bottom sheets.

In order to be able to do maintenance works, handrails were considered on both sides of the side-sheets.  Additionally the bridge was built with plenty of wooden beams  along each side which allows the bats to take a break on their way to their hunting ground. 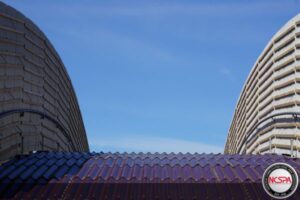