The Thompson Middle School expansion was required as the School District shifted from a three school configuration to two. 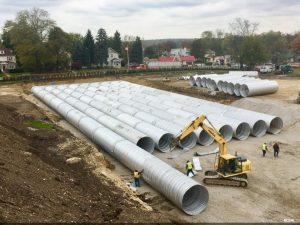 end, the Contech CMP system was selected for all three basins.

Factors that led to the selection of CMP included structural capability, longevity, safety, and total installed cost. After considering all of these factors, Aluminized CMP was chosen as the best system for the site. While construction of an open pond would provide cost savings compared to underground systems, safety concerns associated with drowning and mosquito control made that solution less than desirable. Utilizing CMP in lieu of precast concrete helped the project be delivered under budget and allowed for constructing the primary storage facility in the Northwest section underground, thereby alleviating safety concerns and providing valuable land for additional future uses.

Contech assisted Rettler Corp. in designing the layouts of the three CMP systems and assisted the contractors in the bid process; helping bring the project in under budget. This allowed the school district to provide further upgrades to the project including constructing the primary detention facility underground alleviating safety concerns of having a stormwater pond on site. Utilizing CMP proved to be a valuable aspect in saving on construction costs. 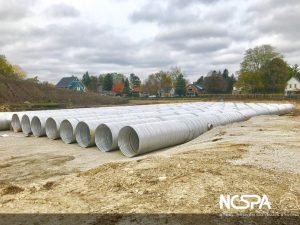 Katco Development performed the excavation, setting, and backfill of the system. Exfiltration loints were utilized along with CA-7 backfill to take advantage of void space within the stone to optimize the design for the lowest cost. Relatively weak soils were encountered on the site that could have resulted in increased costs of remediation for heavier systems such as precast concrete; however, these soils were strong enough to handle the relatively low loads imparted by a pipe system. Finally, the contractor did not require any special equipment and completed the installation with a backhoe, skid steer, and a crew of four.