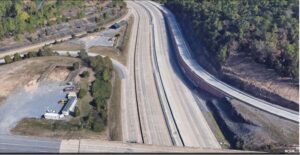 In 2017 improvements were made to the I-430 and Highway 10 interchange in Little Rock, Arkansas to include rebuilding the northbound entrance ramp onto I-430.  The new ramp was built over an existing drainage ditch and included the construction of a retaining wall along the interchange for erosion control and structural support.  The new structures changed the flow of water away from the existing drop inlets causing sheet water to flow across I-430.  This excessive sheet flow created hazardous driving conditions during rain events and increased vehicular accidents along this portion of the interstate.  The Arkansas DOT Roadway Design Team was tasked with designing an improvement project that would preserve the current improvements to the ramp, reduce the amount of sheet water flowing across the interstate, tie into the existing storm drain system, and minimize any traffic disruptions by only having the shoulder area of the road to work in.  It was a complicated situation to say the least! 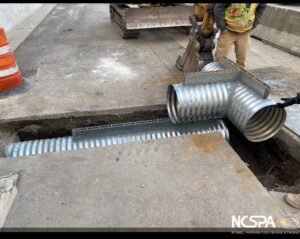 Trinity Smith and Steven Sichmeller were leads with the ARDOT Design Team that determined the least invasive and most economical way to address this hazard was by incorporating 385 feet of slotted drain culverts between the existing retaining wall and the roadway. By utilizing CMP slotted drain and fabricated fittings, the ARDOT team was able to tie into the existing storm water system with minimal disturbance to traffic patterns during construction.   With the slotted drain culvert running perpendicular to the road way, along the retaining wall, the sheet water could be better directed and removed into the existing drop inlets.  The ability of CMP slotted drain to be fabricated and customized allowed project engineers to design a drainage system specifically built to remedy the unique safety hazard created on this roadway. 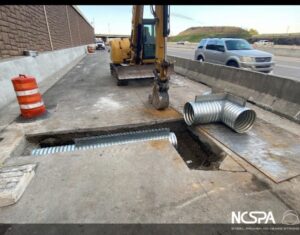 Weaver-Bailey Contactors, Inc was sub-contracted to install the slotted drain culverts. Metal Culverts, Inc. worked closely with Weaver-Bailey to fabricate a system of slotted drain tee’s and elbows along with continuous drain guide connectors for the 18” diameter culverts. This allowed the maximum amount of surface water to flow into the new storm water system reducing the amount of water flowing over the roadway.  Landon Ezell, the project manager with Weaver-Baily, noted the ease of installation with the slotted drain CMP.  He also commented on the effectiveness of the slotted drain, they were not required to change the existing grade in any fashion, saving significant time and money.