Culvert rehabilitation remains a growing industry in an aging infrastructure. Vermont Agency of Transportation (VTrans) has, for a couple of decades, taken the lead on identifying, inspecting and addressing culverts for potential rehabilitation that are near the end of their useful life. VTrans has used various methods including open cut and replacement, reinforced concrete inverts, and segmental sliplining. A majority of the rehabilitated culverts under Vermont’s interstate and state road system are relined with a new smaller pipe 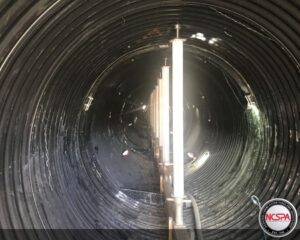 with the same roughness coefficient as many culverts built in the 1950’s and 1960’s were, fortunately, oversized based upon older hydraulic analysis tools. Open-cut and replacement is expensive, especially under deep fills, and VTrans has only completed those where the hydraulic capacity cannot be accommodated. In many cases that approach can be 3-5 times more costly when factoring in staged construction and maintenance of traffic. 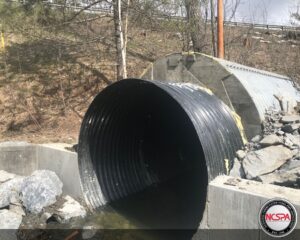 In late 2019, the District Transportation Maintenance Supervisor reported a significant sink hole on the Exit 18 southbound off ramp in Georgia, Vermont. Upon inspection with a video camera lowered into the new void, VTrans determined the sink hole was at least 10’ deep and branched under the travel way in at least two other underground sink holes. The ramp was closed immediately for the safety of the traveling public. S.D. Ireland Brothers Corporation (SD Ireland), a general contractor that specializes in excavation work and concrete work, received a call from the VTrans District 8 Office in St. Albans to inspect the culvert. They reported that the sinkhole on the southbound exit ramp of I-89 was over an existing 11’ diameter vertical ellipse galvanized steel structural plate pipe with almost 20’ of cover. This was most likely the result of a significant rain event in October. VTrans immediately mobilized SD Ireland, shut down the ramp, place detour signage and investigate the massive sink hole. Per VTrans Operation, “Once the detour is in place and pipe investigation work is done, we will determine the best course of action, i.e. trench excavation, common excavation, flowable fill for voids around pipe, possible grout (rapid repair) in the pipe.” Contech Engineered Solutions LLC (Contech) received a call from SD Ireland on the same day to take a field trip to Georgia and inspect the existing structure with them.

A full replacement could occur at this site if work proceeded in an accelerated timeline. Contech developed a 20’-5” span x 17’-9” rise structural plate vehicular underpass shape and was able to commit to a two-week lead time on material. The larger-than-normal rise was suggested by Contech due to the large covers that existed under the embankment to reduce the height of cover over the crown of the structure. SD Ireland, in addition be being the largest site and concrete contractor in Vermont, is also one of the premier precasters in the northeast United States and was able to fabricate a 20’ x 8’ x 120’ long reinforced concrete box (RCB) with a much thickened top slab for the larger than normal earth cover with precast headwalls and wingwalls in a three-four week timeframe, and installed by the Christmas week 2019, and the ramp was re-opened. Late fall and winter are not ideal times to build culverts in northern Vermont due to freezing temperatures, high precipitation and base flows. Maintenance of water was a challenge on this full replacement but provided VTrans and SD Ireland with great site-specific base flow information for what was to come next. 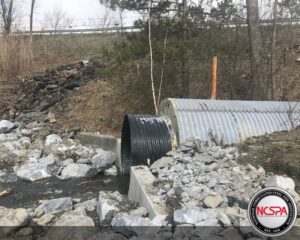 During the November site visit, VTrans, Contech and SD Ireland also inspected a culvert just downstream that was the same size 11’ diameter vertical ellipse (139” x 126”) but was 580 LF long crossing under both the south and north bound main lines of I-89 and a local road on the downstream end. This fairly long culvert, with an average of 17’ of earth cover, typical in Vermont, was at a 45-degree skew to the highway. It was determined that this would be a prime candidate for a segmental liner pipe. The hot dipped galvanized steel plate culvert was installed in 1967 so had met the initial design life expectations for a highway bridge structure of around 50 years.

Apparently, that large rain event in October also caused damage to this existing corrugated metal plate structure. The high water washed material away and settlement caused by the piping material was observed in the median. During monitoring a second area of settlement was observed closer to the shoulder. The northbound lane was subsequently closed. 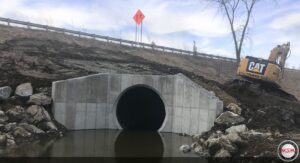 In early February 2020, VTrans personnel reached out again to Contech and SD Ireland as the VT State Police reported a sinkhole appearing under the right shoulder of the northbound lanes of I-89 near the downstream end of the 580’ long culvert. The shoulder and northbound right lane were immediately closed by VTrans and SD Ireland personnel. It was determined by mid-February that this would be lined with 620 LF of 108” diameter round 10 gage polymer-coated corrugated steel pipe and SD Ireland immediately began working. VTrans ordered the pipe from the Contech State culvert contract and 12” – 6” sloping fish baffles were fabricated in the liner pipe at 8’ centers to facilitate Aquatic Organism Passage (AOP). Several rock weirs were also proposed in the downstream outfall channel to create back water up into the outlet end for AOP. A new hydraulically improved inlet cast-in-place concrete headwall to lower the entrance loss coefficient was proposed for the upstream end and a toe/cradle wall for the downstream end.

Three 30” diameter solid wall polyethylene directional bores at 550 LF were required to run under I-89 to handle the stream relocation base flow thru a 24” diesel pump. At this time, all travel from China had already been shut down as COVID -19 was spreading around the world and had started appearing in the United States. By early March, all construction work was halted in Vermont due to COVID-19 and the state was on lockdown except for essential services and emergency projects, which this project qualified under.

Once the directional drills were complete and the base flow by-passed, SD Ireland installed a shallow concrete mud mat in the bottom to fill some of the obvious voids under the culvert of the vertical ellipse and to create a flat working platform. This was not a typical approach, but due to cold weather and groundwater infiltration was required and once complete made installing the liner much easier. The first liner pipe sections were delivered on March 16, just as the COVID-19 shutdowns were commencing. March is not an ideal time in Vermont for work with the snowpack melting and the spring rains present, but there was no other choice for this critical interstate repair. Given the critical nature of this project, it was imperative to the infrastructure that the installation proceed. All involved were deemed essential workers and able to continue with the installation to avoid further degradation to the roadway above.

A new improved inlet headwall was installed with a lower the entrance loss coefficient than the existing culvert that had just an inlet toe wall to help mitigate for the 33% reduction in flow area.

The estimated cost to open cut and replace this structure with a 20’ span RC Box at 600 feet long, using the same size box structure as installed under the upstream ramp was $11 M. VTrans also investigated replacement with 3 new integral abutment bridges. These options would have required similar water diversion strategies but would have been more complicated by the staged construction and maintenance of traffic. Total was price of the 108” diameter CSP segmental slip-liner was $4.66 M. Of that total project cost, nearly 50% of it was part of the contingency portion added to what is typically required with a large segmental slip-liner project. In the past 12 years, VTrans has installed about 25 large-diameter, segmental CSP slip-liners under their interstate system with excellent results.