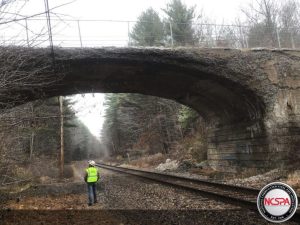 Gregori Construction was contracted by Norfolk Southern to perform extensive concrete repairs on a concrete arch bridge that carries Pennsylvania SR 1025 over an active rail line. The existing bridge, originally constructed in 1914, was suffering from widespread corrosion, spalling and delamination issues. Having successfully completed many long-span arch reline projects in the past, Gregori proposed that a full-scale reline of the arch in parallel with the proposed concrete repairs would provide a structural upgrade to the existing bridge and help reduce the inconvenience of future repairs. The reline solution was ultimately accepted and Contech began work on a custom Deep Corrugated Structural Plate arch design. 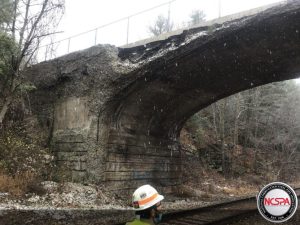 The proposed arch shape would have to closely match the low-profile shape of the existing concrete bridge to allow for adequate track clearance below. Several shapes were evaluated and ultimately a 56′-5″ span x 13′-3-1/2″ rise two-radius arch structure with a nearly 60′ top radius was selected.

Contech furnished a comprehensive package that included structural design of the cast-in-place concrete bench walls, finite element design of the Deep Corrugated Structural Plate arch and a load rating of the structure according to PennDOT requirements. 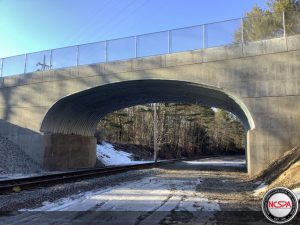 The galvanized arch was built from 3/8″ thick steel at Contech’s manufacturing facility in Winchester, KY. The foundation construction, arch assembly and grouting were all performed by Gregori during the summer of 2021. The arch was assembled plate-by-plate on platforms built just outside the limits of the existing bridge and slid incrementally into pla ce. All construction activities had to be scheduled to accommodate the still active rail line. 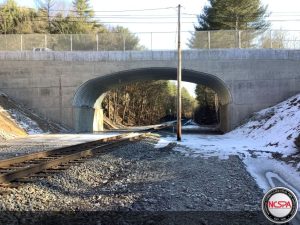 The project was ultimately a tremendous success, taking advantage of planned maintenance to implement a structural rehabilitation that will pay off substantially reduced costs of future repair.