The original construction of the Brookport Levee, located in Illinois, began in 1940. In 1949, the City of Brookport took over the operation and maintenance. For decades, the levee continued to function as intended. However, in 2018, the City of Brookport began the process of repairing the Brookport Levee. The U.S. Army Corps of Engineers (USACE) had previously declared the levee unacceptable and stated that the levee should be repaired as quickly as possible. In its current state, it placed the town and its residents in jeopardy should any flood event occur. 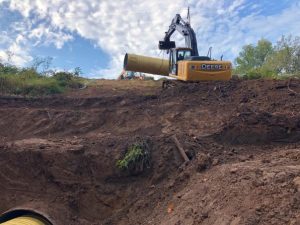 The inspectors cited major problems with the structural integrity of the levee. The drainage pipes installed during construction had performed well beyond their intended service life and were in need of replacement or reline. The USACE Louisville District Office requested that these issues be corrected before the agency would be able to declare the levee’s ability to hold back flood water to an acceptable level.

Originally, the city considered a complete removal and replacement of the culvert. Over the decades numerous trees had grown up along the levee banks, and the cost to excavate, remove and replace the existing pipe was well outside of the original budget for the project. With a population of just over 1,100 people, the city did not have the tax base to consider this option. Instead, they turned to alternative repair options that would meet the USACE requirements.

The project engineer, Brown and Roberts, Inc., reached out to Contech® Engineered Solutions for a solution. Contech presented several options and ultimately, a 60-inch spiral rib ALT2, 12-gage culvert was selected to reline the existing culvert, addressing the failure, while limiting any road closures to the site and saving the City of Brookport a significant amount of money. The unique profile of the spiral rib pipe with a ¾” x ¾” x 7-½” corrugation would provide a Manning’s “n” of 0.012 while the structural design would easily meet the height of cover (HOC) requirements of 62 feet with an HL-93 live loading. The city also chose to further protect the pipe by adding zinc chromate paint to the pipe exterior (the yellow coating on the pipe). The purpose of this extra protection was to protect the aluminized coating from the flowable fill during the curing process.

The spiral rib ALT2 culvert pipe was manufactured at a nearby Contech facility and delivered directly to the site. A grouting plan was developed that ensured the annular space between the reline pipe and the existing pipe was completely filled with grout for the full length of the structure. Additionally, Contech provided a preconstruction meeting to outline the installation details while also providing onsite assistance throughout the entire process. 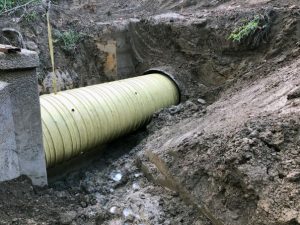 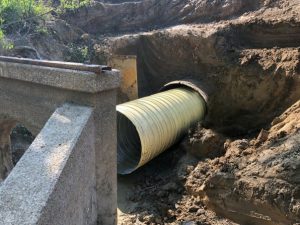 The upstream end of the culvert was restricted, which required a longer placement length for the spiral rib liner pipe, which – in turn – required a longer push distance. Fortunately, the lightweight character of the spiral rib liner pipe allowed it to be manufactured in lengths of 25’ which required fewer joints as well. The contractor was able to overcome the longer lengths through the host pipe by lining the 223 LF run with the spiral rib liner pipe using internal expanding bands with gaskets to connect the 25’ pipe lengths. The manufacturer installed threaded grout plugs which allowed the contractor to place the grout evenly around the structure in stages. By using homogeneous material, the spiral rib liner pipe eliminates failures due to stress cracks, shrinkage cracks and air voids. The result was a fully restored, structural solution that would extend the life of the existing culvert by over 100 service years with the proper specification, sustainability from recycled material, strength, flexibility, versatility, and lightweight material.