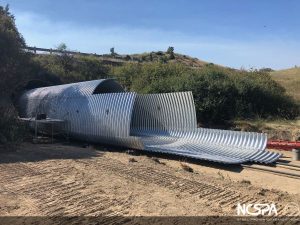 Located in Hysham, Montana, an existing steel structural plate underpass, installed in the 1970’s and used to move farm equipment from one side of the elevated highway to the other, had started to corrode  and some reverse curvature was beginning to happen. Rather than install a new structure, the Montana DOT decided to it was best to rehabilitate the underpass by relining it. 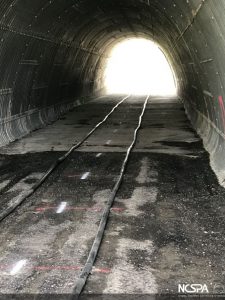 The size of the new underpass shape was chosen so that most farm vehicles could still pass through it while at the same time allowing plenty of room for the new structure to fit through the existing structure.  The reline project began with the contractor first pressure washing the interior of the existing underpass, then placing and anchoring HDPE tubes to the invert to act as rails.  The new underpass was then assembled in 12′ increments and pulled through the existing structure from the other end.

Once the new structure was in place, floor jacks were placed through the top grout ports and screwed tight to keep the new structure from floating when the grouting process began.  Grout ports had been previously installed at the Contech factory prior to galvanizing.

Once grouting began the pours were kept even with never more than 2′ difference from side to side. Once the grout elevation got near the crown of the structure, the floor jacks were removed and the top grout ports were used to complete the grouting process.  The entire annular space between the existing structure and the new structure was fully grouted.

After the grouting was completed, a new concrete floor was poured in the invert and new headwalls and wingwalls were cast in place to complete the project. From the date the plates showed up on site, the project took approximately 2 weeks to complete.