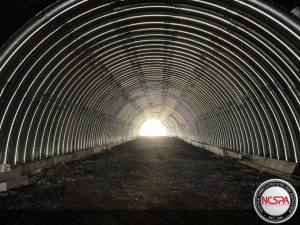 The “Zonguldak Highway Tunnel” project was designed to allow for extra increased traffic into the Zonguldak province, which is located in the inner parts of the Western Black Sea Region.   Not only did the new tunnel allow for increased traffic, but it also allowed for a change in the railway system to occur.  Previously, studies had been conducted on how to maximize the safety of the railway system that ran through the region.  After reviewing the results it was decided that the line needed a vertical shifting.  This shifting was to occur at the exit section of the newly formed tunnel.   Engineers decided the best way to handle the new railway shift was to use steel in the new underpass both for it’s strength and short construction timeframe. 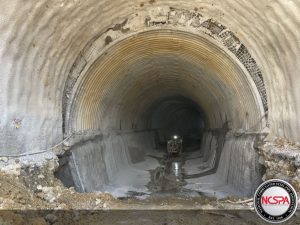 A deep corrugated structural steel plate structure with 15″x1.57″ corrugation was used as the secondary support system in the project with a span of 38 ft and a height of 23 1/2 ft. The total tunnel length for the 2 structural plate underpasses was a whooping 398 FT!   Due to some unforeseen difficulties in the application phase, the nuts were applied inside the structure during construction and then concrete injection was applied to the gaps between the tunnel surface and the corrugated steel structure.  All steel structure fabrication and installation works within the scope of the project and reinforcement supervision were carried out by ViaCon Turkey. The project was completed in 2 months. In total, 320 tons of steel was used for the assembled for the structure. 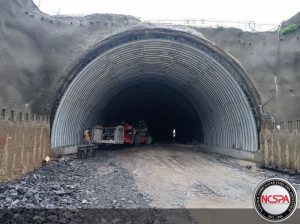