Project Spotlight: Renovation of the Bridge at KM 21.529

NCSPA » News » Project Spotlight: Renovation of the Bridge at KM 21.529 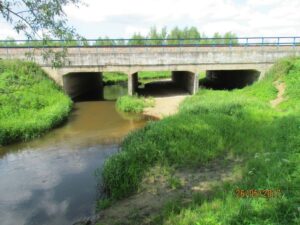 After evaluating a crumbling reinforced concrete railway bridge, city officials decided it was time to replace the bridge with something more structurally sound.  Because the bridge was part of an active railway line, down time considerations were a large part of the decision making process.  After evaluating multiple options, a deep corrugated structural plate bridge was chosen for the bridge rehabilitation of the reinforced concrete bridge not only because of it’s strength but because of how quickly the replacement could be built and installed – all resulting in minimum disturbances to the railway.

To further reduce downtime each of the corrugated plate arches were constructed in the manufacturing facility and transported to the worksite.  Once on site, the arches were successfully pulled into place and the railway bridge officially open for transportation again.  Total downtime for the railway was only a few days versus what could have been months. 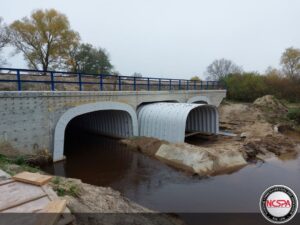 Each of the structural plates were galvanized in accordance with EN ISO 1461 and additionally protected against corrosion by a 200 µm layer of epoxy and polyurethane paint.  The square cut inlet and outlet of the structures were equipped with steel collars and the headwalls were made of cast in place reinforced concrete creating a very appealing aesthetic. 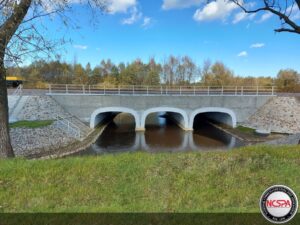