Located in Nanortalik in Greenland, there sits a tunnel that is established at the very top of a mountain.  The purpose of the tunnel is a simple but important one – establish access to the service building at a tele 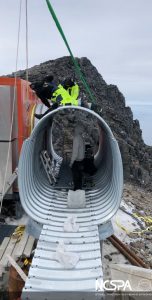 station during  the winter. Winter months in Greenland can be especially harsh as much of the time enough snow falls to completely blanket buildings and vehicles.  Over the past few winters the crew at this particular tele-station had to dig tunnels through the snow in order to reach the access buildings.  Additionally, ice covered antennas increase the risks to the crew as chucks of ice fall to ground when the weather starts to warm up.  With the tunnel in place the crew would no longer have to worry about falling ice blocks as they traveled between communication buildings.

The tunnel itself rests on piles that are anchored in the mountain. The connection between the piles and the tunnel is then secured by brackets matching the corrugation of the tunnel. In addition to the brackets, the tunnel is held in place by wires attached to rock anchors.

The tunnel itself connects three buildings by openings on the sides, which required exact measurements to match the door opening. Moreover, there is a roughly 4 foot difference in the floor level of the two first buildings versus the third one.   Because of this height difference, the tunnel was produced with a stairway on the middle.  In order to allow the crew to wal 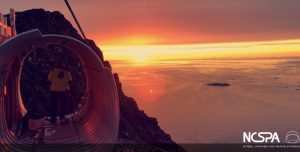 k safely through the tunnel, grated flooring was installed in the bottom of the tunnel.

There is no road access to the mountain top so all the materials were strapped down and flown in by helicopter in bundles weighing up to 1874 pounds. This weight limit, along with the limited space on the mount top, also encourage some assembly creativity since only very light equipment could be used.  In the end the tunnel was built and the crews were able to traverse the harsh terrain safely.