Throughout the framework of America’s secondary road system, county highways, and recreational trails lie tens of thousands of older timber frame and steel bridges. Many of these bridges are nearing or have already reached the end of their expected service life and are placing financial strains on counties as they require extensive maintenance and repair 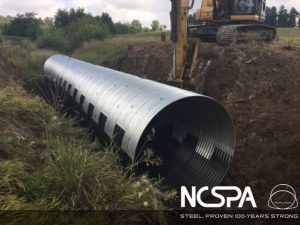 dollars to keep up with state and federal bridge safety standards. Many of these structures are on roads that do not receive the high traffic counts of a more

urban infrastructure, however their importance is no less. Billions of dollars in agricultural trade rely on a safe and reliable secondary road system where farmers and ranchers can move crops and livestock quickly and efficiently to and from markets. 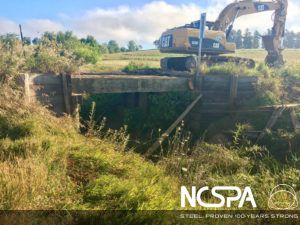 On this particular bridge replacement, Guthrie County was replacing a 22’ long x 16’ wide timber bridge that had no record of installation date. The Guthrie county engineer considered three replacement options based on the size of the drainage area and required hydraulics at the site. Option 1 was a Single 6’ x 7’ reinforced concrete box; Option 2 was a single 84” corrugated metal pipe; and Option 3 was a twin run of 60” corrugated metal pipes. When the cost analysis was completed, the single run of 84” CMP was the clear winner. 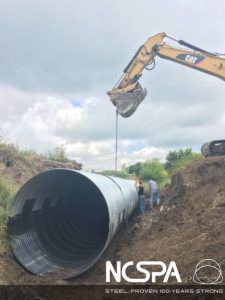 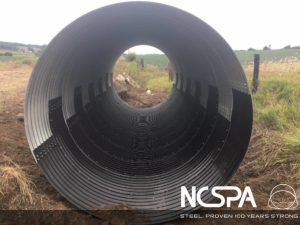 The county was also presented an option of using Metal Culvert’s “Zebra Pipe” on this particular project. Zebra pipe is a “hybrid” corrugated metal pipe product that is constructed with both traditional galvanized steel on the top half of the pipe, and polymer coated steel on the bottom half (invert) of the pipe. The “Zebra Pipe” (as named by one of our customers who first saw the pipe and claimed it looked like a zebra) provides an economical choice to end users who are interested in providing superior protection at the pipes most susceptible point for corrosion, the invert. Metal Culverts offers Zebra Pipe in diameters from 48”-144”, standard and 3×1 corrugations, and both round and arched profiles. According to Mr. Shelter, the location of this pipe that included runoff from a larger cattle feedlot as well as its location under a fairly well traveled and important section of road made choosing a product with the added protection of polymer coating and the 100 year service life an easy choice.