The town of Lyons in Walworth County Wisconsin was faced with the task of replacing one of their bridges that had recently been deemed structurally inadequate. Like many townships across the state and country, funding was tight and the bridge replacement was added to an already long list of infrastructure projects needing to be addressed. The town, after recognizing the severity of the situation, enlisted the services of Baxter and Woodman Consulting Engineers in Burlington, WI to help with design work and the development of options for the town to consider in replacing the bridge. 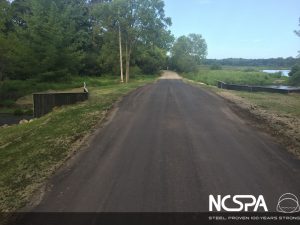 An initial estimate of $300,000 was calculated to replace the existing bridge. Based on financial budgets, time allotted to complete the project, and specific site limitations (the project footprint could not extend past the roads right of way), the engineers at Baxter and Woodman developed three alternatives for replacing the bridge. Option 1 was to install a twin RCP box structure, Option 2 was to install a precast modular bridge type system, and Option 3 was to install twin 41’ runs of 84” 14 gauge 3×1 arch (95”x67”) galvanized corrugated steel pipe (CSP) with headwalls and sheet pile wing walls. 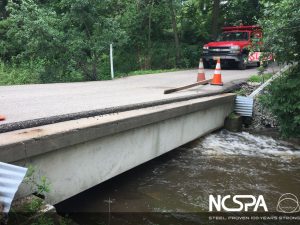 The town was somewhat reluctant to consider the CSP option as they had seen other galvanized CSP structures in the area show excessive corrosion prior to meeting the structures expected service life. This situation is not unique in this part of Wisconsin where acidic soil and water conditions, deicing agents used on winter roadways, and runoff from agricultural areas all contribute to an environment where other CSP products have shown premature signs of corrosion. Recognizing this, the engineers at Baxter and Woodman decided to design the project utilizing polymer coated CSP. The designers realized the enhanced corrosion resistance polymer coating provides and the wider range of environments polymer coated CSP could be utilized in.

To take it one step further, rather than using traditional sheet piling material for the wing walls, the design team at Baxter and Woodman worked with Metal Culverts Inc staff to design the headwall and wing wall portions of the structure using 8 gauge 3×1 corrugated polymer sheet. The polymer headwalls and wing walls allowed for shorter pipe runs that did not encroach past the roads right of way, provided streambank stabilization, and presented a uniform appearance with all 3 components of the structure (headwall, wing wall, and pipe arch). 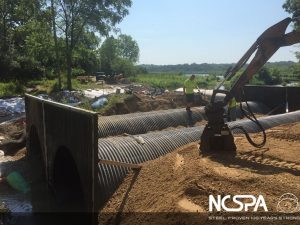 After all the design modifications were made to the CSP option, it was decided by town officials that the most economical and durable option for replacing the bridge was the polymer coated CSP structure. As noted in the plans and shop drawings for this project, the wing wall portions were designed using 9’ panels and could be installed in one step. This was especially beneficial on the larger 27 foot wing wall section, where pre-assembly and installation in one piece saved notable time and money. According to Andy Keyes with RLP Diversified who installed the structures, the prefabricated polymer wing walls were easy to install and noticeably cut down on installation costs and times typically associated with installing 18” wide sheet pile sections. The project was completed to plan and all parties involved were extremely happy with the outcome.