Lonoke County Arkansas is a rural county located in Central Arkansas having a geography that ranges from steep rolling hills in the northern parts of the county to large Arkansas River flood plains in the southern portion.  Because of this diverse topography, land use in the county varies from recreational use and timber production in the hillier northern areas to intensive agricultural practices in the southern lying flood plain areas.  Managing infrastructure on such a wide range of lands has been a challenge for county highway department officials who manage approximately 750 miles of roads within the county. 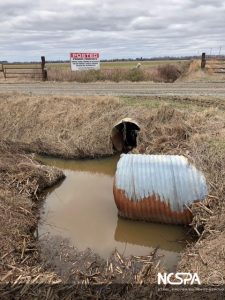 Ultimately, county road officials were tasked with the responsibility of finding a culvert material that would be able to handle the high abrasion loads present in the rocky rolling hills, meet the increasingly heavier equipment loads being placed on the roads from ag and forestry equipment, as well as withstanding corrosion from increasing agricultural runoff containing high fertilizer, pesticide, and insecticide concentrations.  While county officials and decision makers understood and appreciated the strength of galvanized steel culverts, extremely harsh environmental conditions in the county 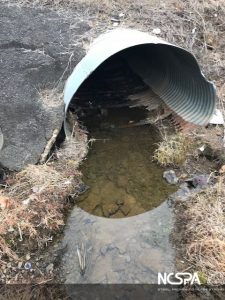 created situations where galvanized CMP products were reaching 10-12 years of service life-well below their desired levels.  8 years ago, needing to find a solution to the service life issue, the county began researching alternatives and through extensive research discovered polymer coated corrugated metal pipe.  Jared Davis, Superintendent of Roads for the Lonoke County Highway Department, realized that plastic and concrete culvert alternatives could not provide the answer county officials were looking for in regards to ease of installation and extreme durability the polymer coated CMP offered.  He became a leading proponent for converting the county’s pipe usage over to polymer coated CMP as it was a steel product he was familiar installing, it had the strength he knew would be required, and it would be able to resolve their service life issues.  All of these attributes available in a very economical offering made the choice an easy one!  After positive performance results over the past 8 years, the county continues to utilize polymer coated CMP in 12”-72” diameters for most all cross road applications.  In Mr. Davis’s words:

“Switching to polymer coated pipes was the best decision I have made with regards to culverts in this county and I’m confident when we install a pipe, I won’t have to deal with it again on my watch (unless something catastrophic happens).” 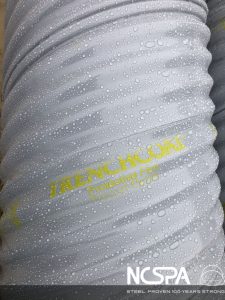 For the last 8 years, Lonoke County has been using the “premier” product in the corrugated metal pipe industry.  In an industry that does not experience rapid change or frequent product developments, when change does occur it is a BIG deal- especially when it involves enhancing its premier product offering.  In its history to date, Trenchcoat (the polymer film’s brand name) has been produced for the US CMP market in the black coloring.  Recent conversations with members (fabricators, coaters, film manufacturers, and steel manufacturers) of the National Corrugated Steel Pipe Association took place on the possibility of switching the industry standard from using black polymer film to a gray colored polymer film.  Employees of Valfilm, the current manufacturer of the polymer film, were able to provide valuable insight on differences between the two colors and highlighted the gray films current usage in bridge deck material in the United States and its use as the primary coating color for CMP in the northern European market.  Mike Mounts, Valfilm’s Research and Development Manager, was able to confirm the gray film held the same chemical/physical properties as the black film and it would provide an equal level of corrosion resistance as found in the black material.  Of particular interest to members of the NCSPA investigating the proposed change 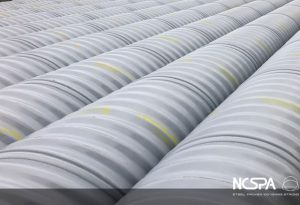 were the additional benefits gray film would provide:

In an effort to continuously provide its customers with the best products available, Metal Culverts Inc was eager to obtain coil coated with the gray polymer film.  As one of the first CMP fabricators in the US to procure the gray coated coil, Metal Culverts Inc was looking to provide a historically strong polymer CMP user with the new and improved product.  The Lonoke County Highway Department was asked to participate in the trial and were more than willing to accept the new product after being presented with its benefits.  Metal Culverts Inc. ran the 16 gauge gray polymer coated coil into 18”; 24”; & 30” diameters of pipe for the county in various run lengths.  The pipe ran perfectly in both helical and annular riveted pipe production with no manufacturing differences noted from the black polymer coil.  Jared Davis with Lonoke County was impressed with the pipe’s aesthetics and specifically noted the pipes similar appearance to the traditional galvanized coated cmp. 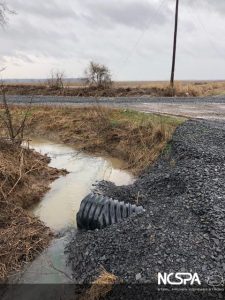 While they say it’s hard to improve on perfection- we at Metal Culverts Inc. feel we did just that!