The Corvallis – Newport Highway in Lincoln County, Oregon connects the interior of Oregon to the Pacific coast. Portions of the highway wind through logging country. The Oregon Department of Transportation (ODOT) was rerouting a portion of the highway to enhance public safety and allow shorter truck routes.

The new section of the highway crosses a canyon used for wildlife migration. Originally, ODOT was planning to cross the canyon using a multiple span bridge. After further analyzing site conditions, they realized that ground movement due to creeping landslides in the area would cause design difficulties and require significant additional cost. Concrete box options were also considered but were determined to be too rigid and costly. ODOT arrived at a solution that involved filling the canyon and building a 28.4 ft diameter deep corrugated structural plate pipe as a wildlife crossing. The structural plate pipe functions as a flexible buried bridge, providing ductility to accommodate ground movements and a size sufficient to allow wildlife migration while meeting design and service life requirements.

The structure was ordered, fabricated, delivered, and installed during the period of March to July 2016. The project was completed in mid-October 2016, providing considerable time savings compared to 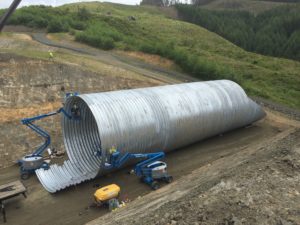 For more information on this project, contact Joel Hahm and jhahm@bigrbridge.com or visit their site.