Shakey Lakes Park, located in Menominee County, Michigan, is known for its great fishing and gorgeous views around the lakes. Both locals and tourists alike take advantage of the many amenities available there, and Menominee County takes pride in the advantages the park and surrounding lakes afford.

At the end of summer in 2018, the Menominee Coun 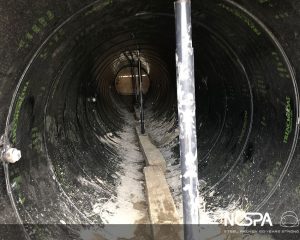 ty Road Commission slated some necessary construction to repair several culverts running alongside the existing dam. In total, there were seven culverts with severe corrosion that required either repair and/or replacement. These culverts had originally been installed in 1963 and had outperformed their intended service life.

To identify the most cost-efficient solution possible, the County looked at several potential options. Reconstruction of the existing dam would be extremely expensive, and the County was hopeful they would be able to identify a solution that would allow for a repair. The ability to reline the existing pipe culverts without replacing the dam as well as the existing concrete headwalls was the most economic solutions, and fortunately it was a viable option.  The Road Commission decided the reline of the culvert pipes was the best option as it allowed the structure of the dam to remain intact. Double wall pipe was specified for use in the bid documents. The outside diameter of the double wall pipe was to be six (6) times less than the diameter of the original pipes. 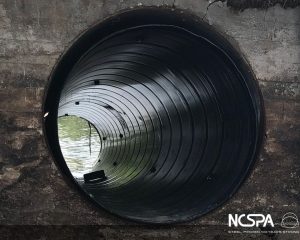 This double wall CSP solution offered a polymer-coated outer shell with a smooth, polymer-coated interior liner to increase the hydraulic function of the culverts. With a standard Manning’s “n” of 0.012, this pipe choice was also ideal as the Michigan Department of Environmental Quality (MDEQ) had limited the size of the new reline pipe that could be installed to ensure that there would be no lasting impact on the environment or the wildlife native to the area.

In preparation for the relining, a temporary drawdown of Shakey Lakes was conducted. Three of the seven culverts were deformed to the point where a partial removal of the existing pipe crown was required for proper installation. The severe deflection of these pipes was challenging but not insurmountable.

A total of 288 LF was relined with double wall CSP, diameters ranging from 54-inch to 66-inch.