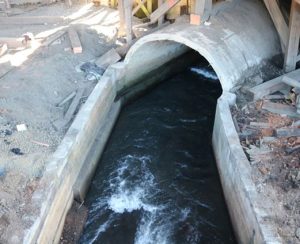 Located north of Monroe Oregon, on a 10,000-acre tree farm, is one of the last commercially viable steam-powered “long” and “large” log sawmills in the United States. Fully converted over to electricity in 2013, it still operates with steam a few times a year to make sure the equipment is in good operating order. Hull-Oakes specializes in cutting long logs and is able to produce timbers up to 85′ from logs over 72″ in diameter.

Pacific Corrugated Pipe Company’s Eugene facility was contacted by Hull-Oakes seeking options to cover a roughly 14′ x 36′ open concrete canal that runs through their property. This cover would ultimately be buried and filled over so that they could expand their storage platform to reach peak efficiency of their space. The existing concrete canal posed unique challenges for the design of a CMP cover due to the variations in span and elevation from one end to the other. There was a 13’ opening on the north side, a 12’-6” inside and 13’-10” outside opening on the south side. The west side wall ran straight with a slight curve along the length and a sharp turn at the south end, while the east side wall had three slight corners along it’s length. There was also a slight elevation change from the north wall to the south concrete cover. 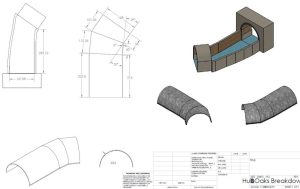 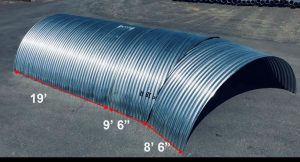 After proposed designs and drawings were approved, production of a 14’ Galvanized 10ga 5”x1” 19’ long pipe was preferred. Next, fabrication of the half round and elbow cuts consisted of pre-arching the round pipe to prevent curling, taking slice cuts out of the half round (similar to fabricating an arched elbow), welding 3”x5” angle iron footings to the bottom of the half round for foundation support, and welding sheets to one end of each pipe joint to overlap and cover any gap. Fabrication was completed in two short weeks.

Given the overall size of each of the three sections of half round pipe, shipping was going to be another challenge. Once cut in half, with welded angle, each section was almost 15’ wide by 19’, 9’-6”, and 8’-6” long. However, Hull-Oakes employs their own drivers for hauling large log truckloads to their mill, so they were already equipped to handle the size of this load. We also used I-Beams loaded cross-wise on the trailer, with lugs welded at each end of the beams, to compress and secure the half round to the trailer while being transported. 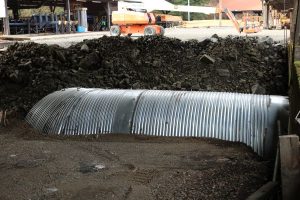 Once the sections of half round pipe arrived on site there was still the challenge of the curvature and elevation changes on site. To accommodate this, Pacific Corrugated designed the pipe with room for tolerance in the span and joint overlaps. Hull-Oakes also had an experienced in-house crew to handle any needed expansion of the concrete wall for footings or adjustment of the corrugated half round sections to make the perfect fit for the canal cover. Installation commenced, and in short order Hull-Oakes had the cover they needed to complete their expansion project …creativity at its finest. 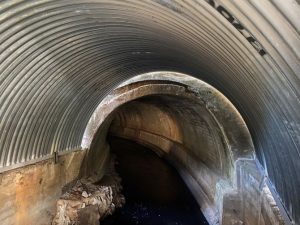