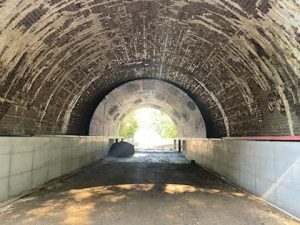 A widespread problem for the railways is the many stone arch bridges and tunnels having reached the end of their service life. These structures were essentially constructed in one generation – and one generation is witnessing the need for their replacement.

Shutting down the tracks is equivalent to shutting down the revenue stream, and the construction times associated with remove and replace projects makes these considerations unrealistic at best. As a result, the railways prefer to rehabilitate these structures in place while rail transports seamlessly continue.

The Norfolk Southern Bridge over Stoney Creek is a classic example of how structural integrity to an existing bridge can be restored without disrupting rail operations. 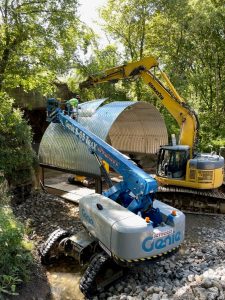 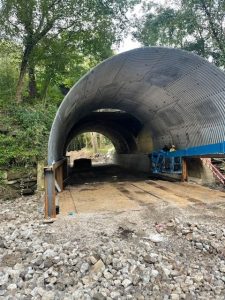 After verifying the dimensions of the existing stone arch a decision was made to use a 26-ft span, 13-ft rise, 5-gage, single-radius structural plate arch with 6” x 2” corrugations. The plate arch first needed a new foundation constructed along the inside of the existing arch, and a dewatering operation facilitated construction of a cast-in-place pedestal footer.

Segments of the structural plate liner were assembled on stilts outside the arch so that assembled rings could be successively slid onto the concrete pedestal. Once the stone arch was completely lined with structural plate the annular space between the two arch structures was filled with grout through prefabricated ports along the new structure. The rehabilitation was complete with new concrete headwalls and wingwalls, formed and poured on the outside of the structure to give the project a finished look. 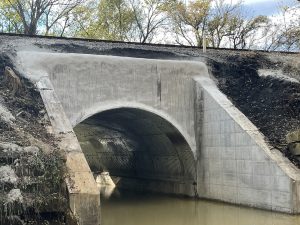