Pacific Corrugated Pipe was awarded a contract for a large medical center located in Tucson, Arizona. The original plans called for 3,000 feet of 120″ 5×1 corrugated metal pipe utilizing 14 gage galvanized material and a 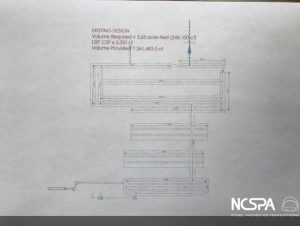 plethora of fabricated fittings. There was a total of eleven manifold barrels that were connected using eight 120″ 90-degree elbows and twenty 120″ tees as originally designed. When the team at PCP reviewed this plan, it was apparent that some money saving changes could be made to benefit the contractor. So, PCP got to work and called in the Casa Grande, Arizona team to value engineer the original plans. 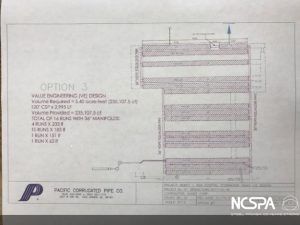 The first insight shared with the contractor was that the cubic foot volume captured in the original design exceeded the amount necessary for this project. The ancillary benefit to a redesign in support of this volume decrease lessened the installation acreage required for the job. The second value engineering change was how the CMP barrels would be joined together. A more simplistic end cap design utilizing a 36″ manifold system was designed and recommended. In addition to allowing for a simpler installation, this engineering change also saved metal fabrication time and allowed PCP to supply the complete system in a shortened amount of time. Since there was some urgency to meeting the completed project timeline, this was the final benefit that allowed the contractor to make an easy decision. The contractor reviewed all change recommendations with the general contractors and all changes were approved. Ultimately, Pacific Corrugated Pipe produced an improved design that took less installation space and was delivered on a timelier basis and at a better overall price. 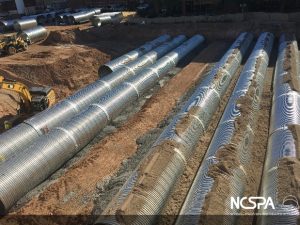