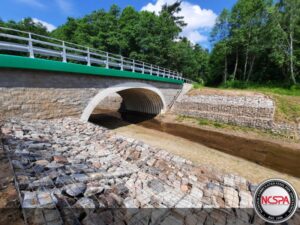 Located in a rural area of Gardyny Leśniczówka, a tiny village in the Warminsko-Mazurskie district in north-east part of Poland, an aging culvert was no longer capable of carrying traffic.  After years of after widespread flooding the culvert had finally deteriorated past the point of recovery. After much deliberation it was decided that the old culvert over the Bauda River need to be replaced by a new bridge.

Due to the lack of other access point to the village, the project had to be finished very quickly.   The new bridge was formed by using an open bottom, deep corrugated structural plates and mechanically stabilized earth retaining walls which enabled safe vehicle traffic as well as free waterflow of the Bauda River.  This new bridge was designed for the Class A Live Load vehicle (4x200kN spaced at 1.2m) Acc. to PN-85/10030 Bridge structures loads.  Additionally each plate in the structure was galvanized Acc.to EN-1461 standard (“Hot deep galvanizing”), and inside epoxy painted 120 microns to assure the life time of 100 years. Just above the structure (6″) a watertight “umbrella” was installed to protect against the leakages of the rainwater. The bridge structure was built with reinforced concrete footings 8.2021 FT wide. The total length of the bridge is 25 FT. 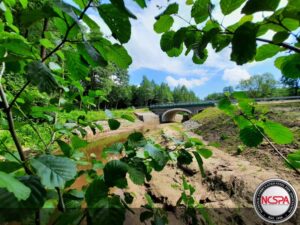 ViaCon was active at various stages of the project starting from designing phase, manufacturing process, delivery and assembly at a jobsite.